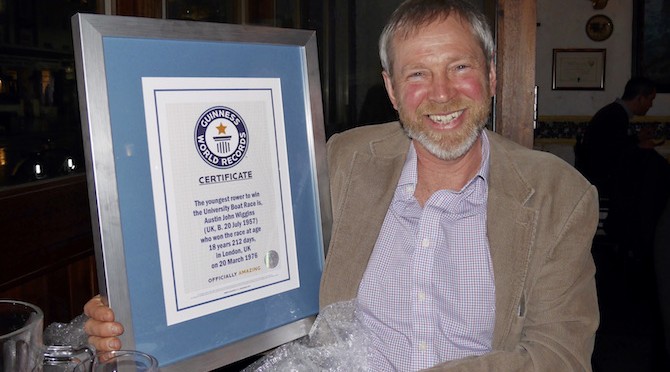 In 1976, the Bulletin reported that John Wiggins, son of Roy and Meta, rowed in the winning Oxford crew in the Boat Race of that year.

A former pupil of Wallingford School, and then in his first year at Keble College, John was No. 7 in the Oxford boat, which not only won the race but set what was then a record time of 16 minutes and 58 seconds over the classic 4 mile (6.8 km) course from Putney to Mortlake. As the Bulletin’s front-page article put it at the time, CONGRATULATIONS JOHN!! Now, 40 years later, that article has helped prove that John should be recognised for another “officially amazing” achievement: according to the Guinness Book of Records, he was then, and remains now, the youngest person ever to have rowed in a winning Boat Race crew. On the certificate held by John in the main picture, the full citation reads: “The youngest rower to win the University Boat Race is Austin John Wiggins (UK, b. 20th July 1957) who won the race at age 18 years, 212 days, in London, UK on 20th March 1976”.

So once again, the Bulletin is proud to say CONGRATULATIONS JOHN!!