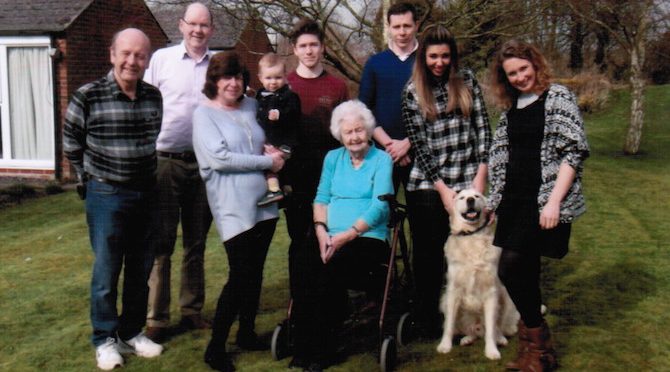 Born in Swansea, South Wales, on March 8th 1917, Glennys moved to Blewbury in the mid 1980s with her husband Frederick (Mick) Bungey.

Mick himself, who hailed originally from Ireland but who had spent most of his life in the West Country, took some persuading to make the move, but for Glennys it was an opportunity to be closer to her brother Malcolm who at that time was living in Bracknell. On discovering that one of the Dibleys tenants was emigrating to New Zealand, they set about selling their house in Cornwall and before long had moved into the bungalow that Glennys still calls home after 31 years. She and Mick, along with Stan Cole and Philip Randall, were instrumental in the move to change the status of Dibleys residents from renters to owners, a process that was completed in 1988 with all the properties being bought by their tenants. With the security of home ownership and the reassurance of centrally managed maintenance, heating and other services, she recalls that Mick often referred to Dibleys as their ‘haven’. She still feels that way about it today, and hopes that all those residents younger than her (i.e. everyone!) ‘will be as happy here as I have been’.

To mark her 100th birthday, her nephew organised a ‘proper English tea party’ here in the village, which was attended by many old friends and family including her brother Malcolm, who was 91 last month, and her great-great-nephew, Edward, who at Christmas reached the grand old age of two!