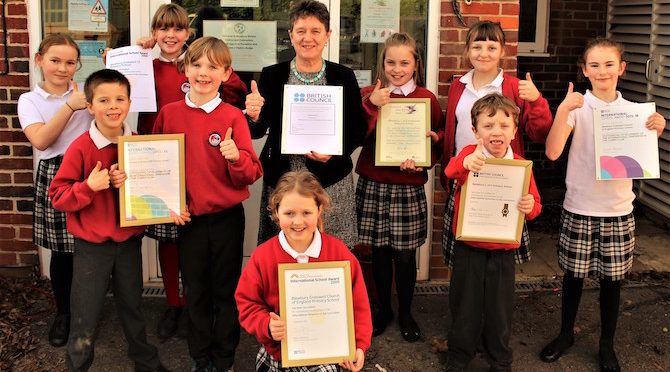 As parents already know, after 22 years as Headteacher of Blewbury School, Marion Mills has announced that she is retiring at the end of the current term.

Anyone who knows Marion will be aware of her exceptional commitment to the School and to the children. During her tenure she has focused on giving the children a broadly based education in addition to the conventional “three Rs”. This has involved contact with schools in many other countries including Finland, Spain, Uganda, Poland and Germany and every year a succession of teachers and pupils from abroad have visited Blewbury School and given our children a taste of languages and cultures from around the world. As a result, our School has received the International School Award from the British Council a stunning eight times in succession. This is, quite literally, a world record.

She has also been committed to helping the children to develop as people and to this end every year has enthusiastically organised residential weekend trips away to activity centres across the country for virtually all the children in Classes 4 to 6. Under her leadership our children have broadened their belief in themselves whilst enjoying abseiling, aerial walkways, body boarding, bushcraft, climbing, canoeing, night walks, nature walks, pond dipping and the occasional zipwire.

Behind the scenes she has worked tirelessly for the good of the education community as a whole. She has chaired the Didcot Partnership of schools for many years, a role which has grown in importance with near collapse in Local Authority support for schools due to funding cuts in recent years. Under her leadership, money has been raised to a fund the Didcot Early Nurturing Centre (the “Den”) which provides short-term, focused help for children who are struggling, for whatever reason, with a conventional school environment. The Partnership also does important work supporting schools with educational psychologists and facilitating training opportunities for school staff.

And of course, she has led the school for all these years in the fundamentals of a good education which, at primary level, means reading, writing and maths. A whole generation of children owe the beginning of their educational journey into adulthood to Marion’s leadership. It is sobering to think that some of the children who passed through her care in her early years will now be old enough to deliver their own children into the school.

In summary, now is the time for the children past and present, the staff, the governors and the wider community to say a heartfelt thank you to Marion for her many years of commitment. We wish her well in her hard-earned retirement. She will be a difficult act to follow but the governors are already underway with the process of identifying her successor. Andrew Hewson, Chair of Governors