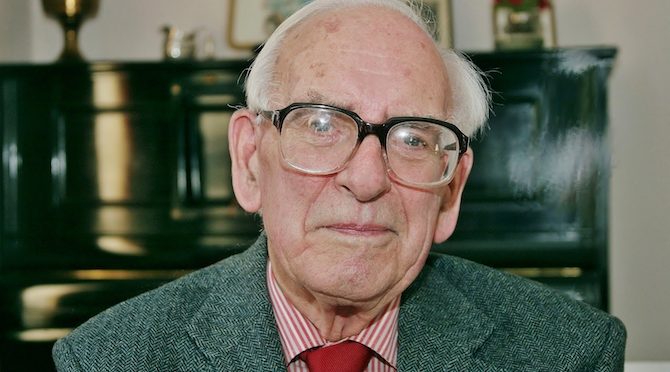 William Dent Robinson, one of Blewbury’s oldest residents and the sole surviving member of the original staff of St Birinus School, Didcot died peacefully in his sleep at home on 4th December. He was just three weeks away from his 106th birthday.

William’s family were from Cumbria though William spent much of his childhood in Leicestershire after his father became the head of a village school there. After attending Reading University, in 1933 William joined the then co-educational Didcot Secondary School at its Manor Crescent site (now part of Didcot Girls School). It was here that he met his future wife, Winifred, who taught Mathematics. Three years later when Berkshire County Council decided to segregate the boys from the girls, William was a founder member of the staff of Didcot’s newly built St Birinus Secondary Modern School for Boys.

William took a break from teaching to serve in the Royal Air Force during the Second World War. He undertook wireless interception and intelligence work near the front line in Europe. He took part in the D-Day landings and in 1945 he was close by when the German Belsen concentration camp was liberated and when Field Marshal Montgomery accepted the German surrender on Luneberg Heath, North Germany on 4 May prior to VE Day. After a subsequent posting to India and Singapore, in 1946 William returned to Didcot to resume teaching at St Birinus School. He oversaw the Geography Department and was also acting Headmaster for a year and for two decades was Deputy Headmaster. In the early 1950s William oversaw and participated in one of the UK’s earliest post-war pupil exchange visits with a German school – to Bad Harzburg. He was also active in the National Union of Teachers and was a member of the local examination board for Geography before retiring in 1973, just before Didcot became part of Oxfordshire.

After that William enjoyed cycling, walking, reading, writing, doing The Times crossword and gardening at his home in Blewbury where he lived for over 75 years. He also kept a close watch on the local weather, having his own meteorological records dating back over 60 years. After his wife Winifred’s death in 1992, William was involved in the John Betjeman Society, the British Legion and the Methodist Church. Until 2016 he continued to visit family in Cumbria each Summer and still maintained close links with former pupils and teaching colleagues from St Birinus School.

William could very clearly recall the celebrations at the end of World War One and he often reflected on the many changes that had taken place over his lifetime – the jet age, space exploration and the IT revolution. As a former Geography teacher he enjoyed Google Earth and was also fascinated by satellite navigation. But he always said the most amazing thing in his lifetime was Man’s landing on the Moon!

William is survived by his son Nick and daughter-in-law Linda.