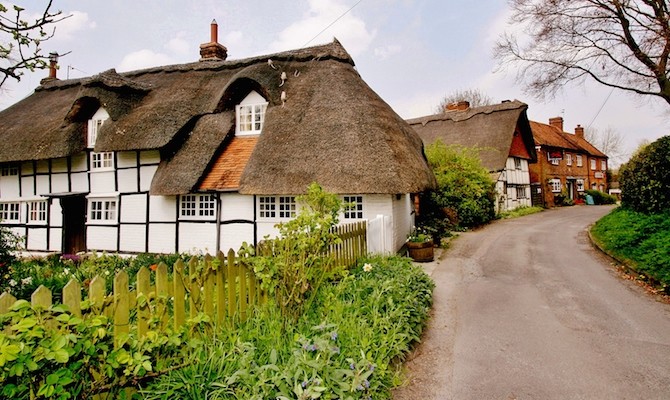 The first written reference to Blewbury dates back to 944 AD, when a Saxon charter describes ‘Bleobyrig’ as a ‘venerable’ village.

Legend also has it that St Birinus preached at nearby Churn Knob over 300 years earlier, while the Iron Age fort on Blewburton Hill provides clear evidence of settled human occupation a thousand years before that. By the time of the Domesday Book, published in 1086, the village comprised three manors, 89 households, four mills and a church.

Of the three manors, the Great Manor was owned by the King until the seventeenth century. The Prebendal Manor was assigned to the Church. The third, Nottingham Fee, was bought by the long established local family the Humfreys in about 1652. They retained some of it including the manor house Hall Barn until recent times.

During the English civil war Blewbury was in no man’s land between the King in Oxford and the Roundheads. On one day a troop of Cavaliers arrived at Hall Barn and demanded lunch. They had just been satisfied and departed when a troop of Roundheads arrived with the same request, and were served at the same tables.

The Enclosure Act of 1805 consolidated the myriad small holdings of the vast East and West Fields into the patchwork of individually owned farmland we know today. The original map showing the new divisions is now in the care of the Local History Group.

Around the end of the 19th Century, the open areas of the downs were used for military manoeuvres each summer, the camp being victualled by the local farmers. A firing range was also introduced, and was used intermittently until the 1970s.

A railway line was built past the village at the end of the expansion of railways in the 1880s. The local station called Blewbury and Upton was in fact in Upton. The line was widened to 2 tracks in the 1940s to support the D day landings, but was closed in 1964.

For the first half of the twentieth century Blewbury attracted a number of notable artists and writers such as the painter John Revell, the illustrator Trissy Webster and the authors Kenneth Grahame and Marguerite Steen. The artistic tradition continues today, and examples of current local work can be seen on this site.

Science, too, has played a significant part in the village’s development, principally through the arrival of the atomic research establishment at Harwell shortly after the war. An unintentionally hilarious newsreel of the time shows many shots of Blewbury, although the commentary describes it as Harwell and the Pathé News text caption has it as Didcot.

Until about 1970 there were several racing stables in the village; one is still in business a mile to the south, and there are several actively used racehorse gallops on the Downs. Having been celebrated by the poet John Betjeman as the quintessential Berkshire village, Blewbury became part of Oxfordshire when the county boundary was moved in 1974.

For more information about the history of the village see www.blewburyhistory.org.uk