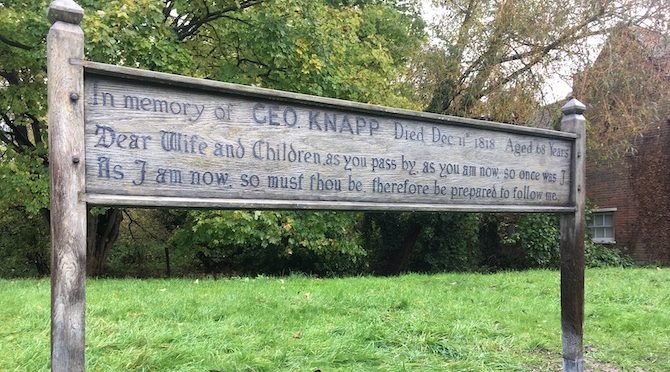 The Geo(rge) Knapp memorial, a splendid old survivor in St Michael’s churchyard, is back in place, after two months of technically very demanding work.

The principle problem was damp-rot (see picture below), which had entered the structure at several points and was so severe and accelerating that, if restoration had been delayed for another year, in all likelihood it would have been impossible. 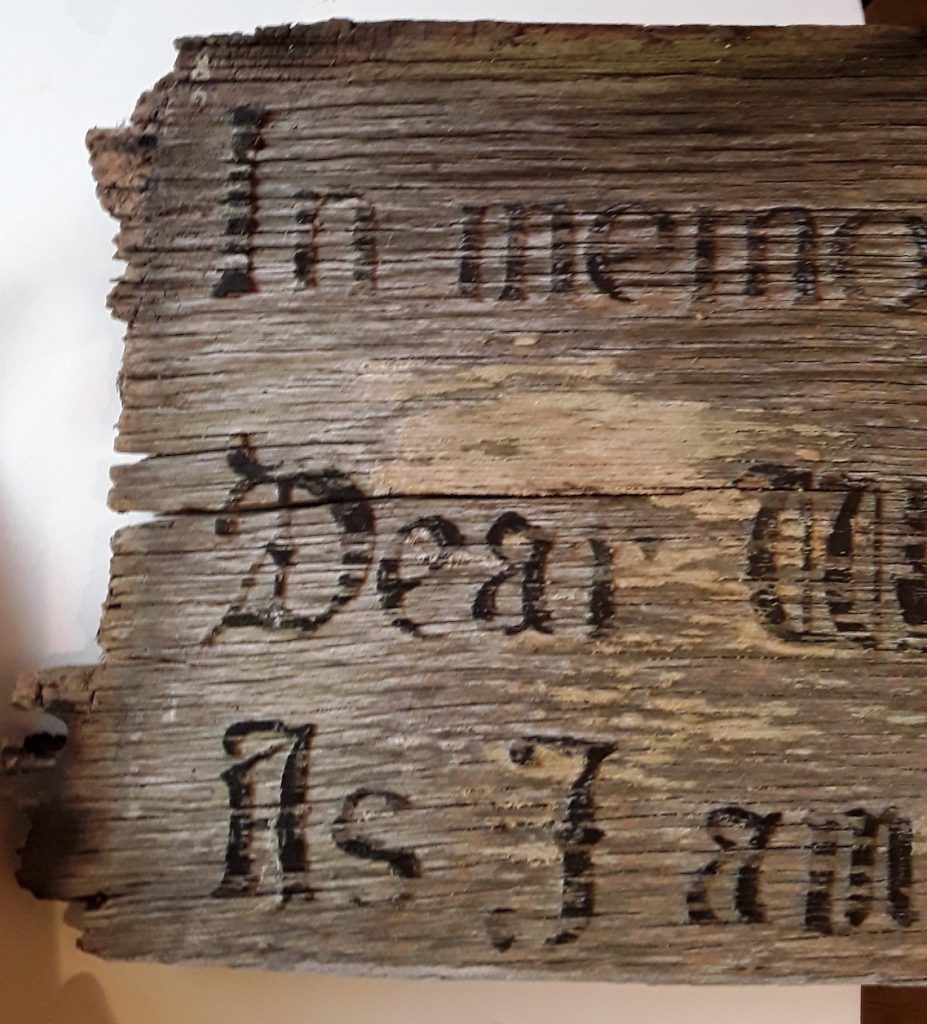 It was necessary to replace the top and bottom rails with fine sycamore, and the top and bottom edges of the board with an inch of walnut. This was a hair-raising process, as the boards were crumbling almost as fast as they were worked upon (rather like an OXO cube!) At least 8-10 flaking and unstable previous re-paintings of the lettering had to be removed, which revealed that the letters had “drifted” slightly from their original positions. It was amusing to discover  that the sign board itself was an old, re-used, Elm floor-board!

The finials which surmounted each side-pillar were seriously damaged, and letting water in at each end: these were replaced with butt-jointed (and pegged) close-grained walnut. In addition, four drip-rails were added to the main rails to deflect rain run-off.  Over many years a great number of nails and screws had been bashed into the rails, which had caused great damage…and let in even more water.

The main consideration, after removal and replacement of all rotted timber (which included the lower ends of the side-pillars, which had been buried and needed considerable strengthening), was to render all the joints of the assembled structure totally waterproof. Then came the enjoyable part of the project: the “re-antiquing” of the new work to match the remaining original parts. Decades of previous experience had shown that stains are generally useless for this type of work, and flexible waterproof acrylic colours were used. These have excellent adhesion and resistance to fading. Both the grain character and colour were painstakingly recreated, even to the extent of a couple of fake bird-droppings and several straggling lichen patches! All joints, rail surfaces, finial tops and side-post buried-ends were given 8 coats of flexible waterproof acrylic varnish, but only after the entire Memorial had thoroughly dried out, and all mould and rot destroyed. Phew!

Many thanks to Peter Saunders, Father Jason, Marianne Suhr, and Calley for their help and support.