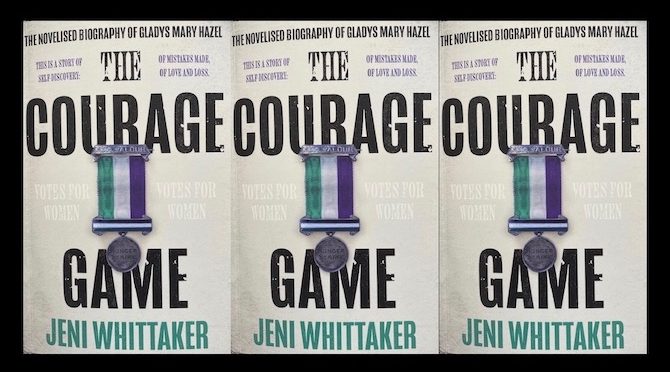 The Courage Game is a fictionalised account of the life of Gladys Hazel, who is the infamous Militant Suffragette, who lived in a bungalow in Westbrook Street. from  1939-1959 and is buried in the Blewbury Cemetery.

It has been written by Gladys’s great niece Jeni Whittaker, who has kindly agreed to come to the village on Friday 15th October to give a talk in the Vale Room at 7:00pm about her book.

The novel starts in Blewbury in 1950, where Gladys who was by then retired decides to write about her very eventful life. Her life story was something of a secret until Jeni Whittaker’s father Peter Waterfield discovered her account, when he was clearing out a potting shed in Devon many years after Gladys had died . Jeni used this account as the basis for her novel, which will make fascinating reading for anyone with an interest in Blewbury, the Suffragettes, or even what life was like for a young independent woman born in the late 1800s.

The publicity for the book states:

‘Gladys grows up in a large family, convinced she is the odd one out especially compared with pretty Rita, the sister closest to her. Then elder brother Jim invents a new game he calls the Courage Game, in which all seven of the children will be tested for their ability to keep a stiff upper lip.

Little does she know, she’ll recall this game later, comparing his little hand-made badges to those handed out by the W.S.P.U, the suffragettes. The poverty of Ireland in the 1890s is capped by the terrible conditions of the Birmingham slums where she first works as a teacher.

Heartsick at the hardship she sees all around her, she’s driven to change it, but only the Pankhursts seem to offer any hope of a woman’s voice being heard – providing they win the right to vote, that is. Enthusiastically, Gladys throws herself in, juggling her job, her burgeoning love life and her work for the suffragettes. But how long can one woman keep walking such a line without losing her balance?’

The Courage Game is available from all good booksellers. Come along to meet and hear from the author on October 15th in the Vale Room at the Village Hall at 7pm. Tickets £5 from the Post Office. Glass of wine or soft drink included. Roger Murphy, Local History Group